The Latest
(Last Updated On: December 30, 2016)
We ranked millions of Sporcle quiz results from 2010-2016 to reveal the most memorable Pokémon. Hint: it wasn’t Pikachu! As the world’s largest trivia and quiz site, Sporcle has a lot of data at our disposal. Each time someone plays one of our quizzes, it reveals what they remember right now, and what they don’t. Together, these results –spanning hundreds of millions of responses every year– give us some unique insights into the world’s knowledge on virtually any topic.

One of the most popular topics on Sporcle is Pokémon. We have thousands of quizzes covering almost any aspect of the Pokémon universe, from the obvious (can you name the different types of Pokémon?) to the obscure (which Gen. I Pokemon have 7-letter names?). But the most popular Pokémon quiz, by far, is this one, challenging people to name the original 151 Pokémon –the ones introduced in Pokémon Red and Blue Versions– in 12 minutes or less. This quiz has been played more than 3 million times since it was created in 2008, and has proven so popular that thousands of fans (including a number of prominent video creators) have filmed YouTube videos of themselves taking the “Pokémon Original 151 challenge” on Sporcle.

This year, the Pokémon franchise is celebrating its 20th anniversary. To commemorate this milestone, we thought it would be fun to rank results from plays of the Original 151 Pokémon quiz between 2010 and 2016 to show which first-generation Pokémon people remember most, which are least-remembered, and how this knowledge –which we call memorability– has changed over time.

Pikachu is one of the most beloved characters in the Pokémon franchise. The furry Pokémon has long served as the mascot for the sprawling Pokémon empire; you can find Pikachu’s likeness on trading cards and apparel, in manga and movies, and on TV. The electric Pokémon is so recognizable worldwide that it’s been compared to a Japanese Mickey Mouse.

Given Pikachu’s prominence, we assumed our data would rank Pikachu as the most memorable of the original 151 Pokémon. And we were right…..sort of. When we compiled our year-by-year data, we found that Pikachu had indeed held a spot as the #1 most memorable Pokémon in 2010, meaning that people who took the quiz that year were more likely to identify Pikachu than any other character.

But our data shows that Pikachu has seen a continuing slide in memorability since 2011, dropping in four of the last six years. Pikachu dropped to #2 in memorability in 2011, and to #4 in 2013; and in 2016, Pikachu is the fifth-most memorable Pokémon. It’s a stunning turnaround for a Pokémon once honored by TIME magazine as one of the year’s “best people”. 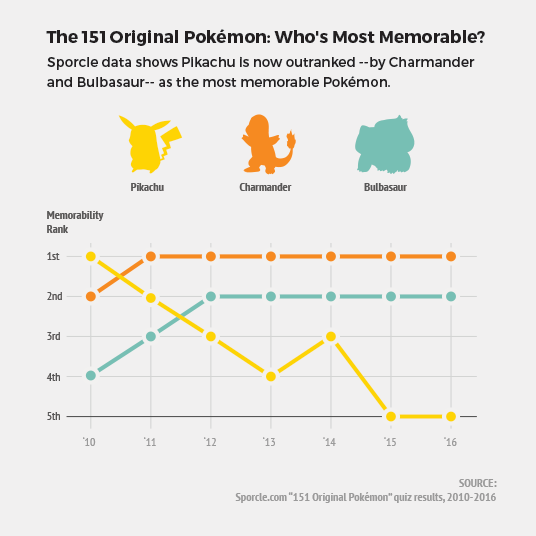 Charmander and Bulbasaur: Battling to the Top

Our data showed something else interesting: as Pikachu’s memorability was dropping, memorability for Charmander and Bulbasaur –two of Pokémon’s three original starters– was on the rise. In 2011, Charmander –the cute reptile with a fiery tail– first unseated Pikachu as the Pokémon fans were most likely to remember; in 2012, Bulbasaur –the amphibian Pokémon with a seed on its back (a favorite of Pokémon developer Junichi Masuda)– also overtook Pikachu, becoming the 2nd-most memorable Pokémon.

Our data shows that in every year since, Charmander and Bulbasaur have been the Pokémon characters fans are most likely to remember. And by 2015, Charizard and Squirtle had also surpassed Pikachu to become the 3rd- and 4th-most memorable of the original 151 Pokémon.

So what makes Charmander the most memorable? Why has the fiery starter seen such a surge in memorability? While it’s unclear what *exactly* drove the shift, we can make some educated guesses. Google Trends shows distinct spikes in searches for the term ‘Charmander’ in 2013 and 2015. The increase in searches in 2013 correlates with the October 2013 release of Pokémon X and Y, which marked the return of Charmander, Bulbasaur and Squirtle as starter Pokémon. The 2015 spike appears to be related to a terrible tattoo of Charmander that went viral.

Ranking people’s responses to the original 151 Pokémon quiz also shows which Pokémon people have the hardest time remembering. The answer: Lickitung. In 2016, only 35.5% of respondents were able to name Lickitung; that’s less than any other Pokémon. Exeggutor and Exeggcute were the 2nd and 3rd-least memorable Pokémon in our 2016 data. (You can see the full 2016 memorability ranking for all 151 original Pokémon at the end of the post.)

Why do fans have a harder time remembering Lickitung? One factor may be its appearance–and more specifically, its oversized tongue (which has been the subject of some truly weird fan art). Among other things, Lickitung has been described as “just gross” (by BuzzFeed), a “weirdo” (by Game Informer), “something straight out of a Lovecraftian nightmare” (by Vox), and as “…the Gene Simmons of the Pokémon universe” (by Entertainment Weekly).

No matter what the reason is, Lickitung has consistently been the most forgettable Pokémon in the franchise, followed by Exeggutor and Exeggcute; the three have held the same ranking since 2013, prior to which Exeggutor (a favorite of Pokémon Company CEO Tsunekazu Ishihara) had been the least memorable.

While we can’t settle the age-old debate over which Pokémon starter is the best, we’re excited to shed some light on which Pokémon are –literally– the most memorable. You can see how your favorite first-generation Pokémon ranked below. We hope this post helps you understand Pokémon in a new way. Sporcle on!

How do you think you’d do on the “151 Original Pokémon” quiz? Click here to take the challenge!