The relation between a team’s performance and people’s ability to remember that team’s name.

Sporcle is the web’s most popular trivia and quiz site. Since 2007, we have offered people a fun way to learn more and challenge their knowledge on virtually any subject, from sports, geography and television to things as esoteric as Pokémon characters and the birthdates of U.S. presidents.

People play these quizzes hundreds of millions of times a year on Sporcle. Each play reveals what one person remembers right now, and what they don’t; collectively, over thousands of days and millions of plays, they tell a story about the world’s knowledge on a topic. We can rank these quiz results to show which answers people remember most, and which are least-remembered. This ranking, which we call “memorability”, offers a unique lens on the prevailing cultural zeitgeist, helping us understand what is top-of-mind right now on any topic — and how that knowledge changes over time.

As we approach the NBA Finals, we thought it would be fun to look at the data from one of Sporcle’s most popular quizzes –the “NBA Teams” quiz, played more than 1.8 million times since 2008– to see which NBA teams are consistently the most memorable, which ones are most frequently forgotten, and how teams’ memorability changes from season to season. We also thought it would be interesting to compare our data with each team’s NBA regular season win-loss record, to see whether there’s any relation between a team’s performance (good or bad) and people’s ability to remember that team’s name. We found some interesting things, particularly about the Golden State Warriors.

The 2000s were a decade of futility for the Golden State Warriors. They had only two winning seasons, made the playoffs just once and in the 2001-2002 season had the worst record in the league. In 2010, the Warriors finished with a 26-56 record in the NBA regular season, 27th in the league in overall win-loss percentage. That year, they were also one of the least-remembered teams on our NBA quiz, placing 28th — meaning only two teams, the Milwaukee Bucks and the Memphis Grizzlies, were less memorable than Golden State. But a lot can change in six years.

Given that Golden State won the NBA championship last year and have had such a remarkable run in the 2015-2016 season, we thought surely their memorability would improve significantly. What we didn’t expect was how closely correlated winning would be to the team’s memorability. The chart below compares Golden State’s win-loss record in the NBA regular seasons from 2010 through 2016 with their memorability on our “NBA Teams” quiz in the same period. 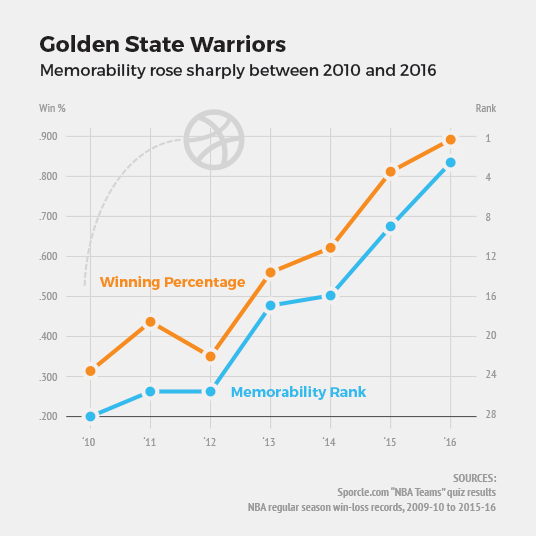 As you can see, the data did not disappoint. As the Warriors moved from 27th in win-loss percentage in the 2009-2010 regular season to the league’s best record in the last two seasons, the team’s memorability changed remarkably. Golden State is now the third most memorable team in the NBA — ahead of storied franchises like the Boston Celtics, the New York Knicks, and the Chicago Bulls. That turnaround –from 28th in memorability in 2010 to third in 2016– is unique in its speed and its scale. Our data shows mild cross-season fluctuations in memorability for many teams (see chart C below), but Golden State’s dramatic shift in memorability is just as dramatic as the turnaround in the team’s on-court performance.

This should come as no surprise: winning a championship, setting an NBA record for regular season wins, having a well-liked superstar like Steph Curry, and an all-star supporting cast in Klay Thompson and Draymond Green would bolster any team’s memorability1.  But in our data, no other team has seen such a dramatic shift in memorability.

But what about losing? Could a team with strong memorability become more forgettable, if they started to lose consistently year-after-year? According to our data, yes.

In 2009, the Orlando Magic made it to the NBA Finals, led by their dynamic star center, Dwight Howard. While the Magic lost in those Finals to the Los Angeles Lakers, the team followed up the next season with the NBA’s second-best regular season record. This success helped make the Magic the 6th most-remembered team on the “NBA Teams” quiz in 2010 (see below). By the 2012-13 season, however, Howard had moved on, and the Magic finished with the worst record in the league. They have placed last in their division every year since, and haven’t made the playoffs. Matching the team’s slump on the court, the Magic’s memorability on the “NBA Teams” quiz plummeted from 6th in 2010 to 16th in 20162. 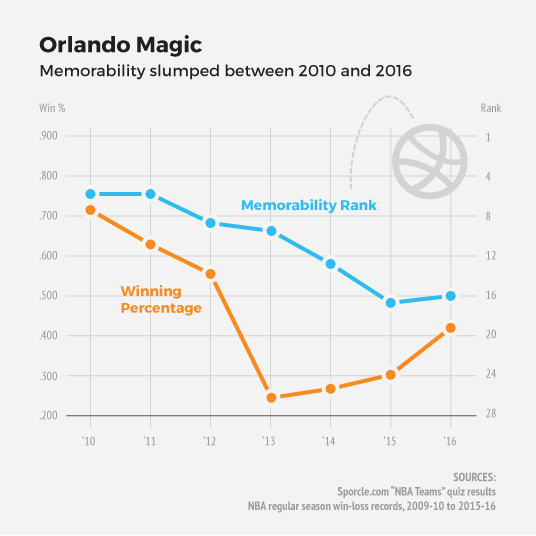 Our data is consistent with Forbes’ annual estimates on NBA franchise values. Between 2010 and 2016, Golden State moved from the NBA’s 18th most-valuable franchise to its 6th (behind only powerhouse franchises like the Knicks, Lakers, Celtics and Bulls). In that same time, Forbes estimates that the Magic dropped from the league’s 13th most-valuable franchise to its 19th. When you lose big, it impacts more than just your place in the standings! 3

In looking at which teams have the highest memorability (see below), it’s striking that the teams with the highest and most consistent memorability tend to be from the largest geographic markets, like New York and Los Angeles, or have an iconic history of winning and championships, like the Chicago Bulls and Boston Celtics. These franchises, among the oldest in the league, have had up to 70 years to build large followings. Teams like the Lakers (2016’s most memorable team), Celtics and Knicks have reached a level of fame where memorability transcends winning or losing; their names are recognizable even to people who don’t follow basketball. Thus, the Lakers can remain the NBA’s most memorable team in 2016, and the Celtics, Knicks and Bulls can be the fourth, fifth and sixth most memorable, despite a string of lackluster seasons for each team.

Our data also revealed that winning is not necessarily enough to make (or keep) your team memorable. When we looked at each teams’ regular season win-loss percentages between 2010 and 2016, the Memphis Grizzlies had the NBA’s fifth-best average. But as you can see from the chart below, the Grizzlies’ success on the court hasn’t translated into memorability. In fact, the Grizzlies have consistently been the least memorable team on the quiz, ranking last in every year but one since 2010. While making the playoffs (as the Magic did in 2011 and 2012) is nice, lack of success in the NBA’s second season and lack of Kobe- or Curry-level star power (quick, name the Grizzlies’ leading scorer in 2016!) have left Memphis stuck in place as the league’s least-remembered franchise. 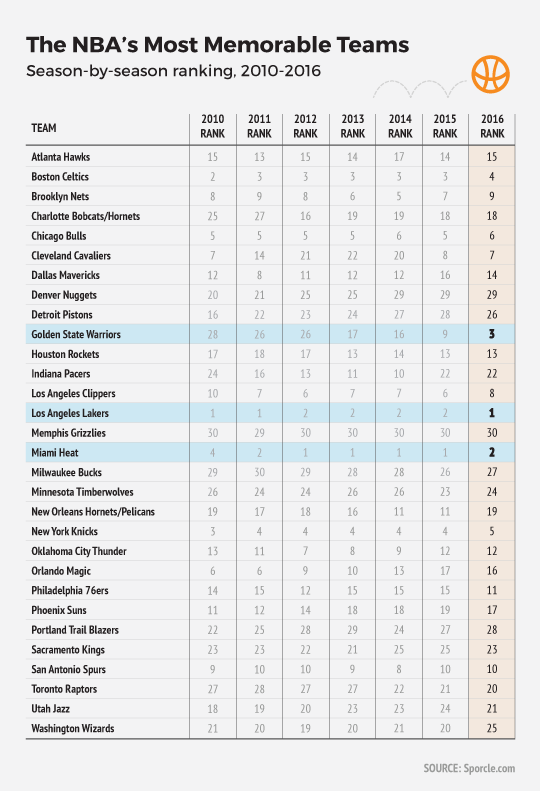 We found this exercise interesting and hope you did, too. In the coming months, we plan to share more insights like these on other teams, leagues and topics; given the variety of quizzes on Sporcle, there’s a lot to share about the things the world remembers.

Until then, Sporcle on.