White’s career started in the 1940s and doesn’t look to be slowing down any time soon. Not unlike her Golden Girls character, she likes to be in on the action. “Retirement is not in my vocabulary,” White said after receiving a Lifetime Achievement Award at the 2015 Emmys. The Guinness Book of World Records recognizes Betty White for having the longest TV career of any female entertainer.

Since she’s been acting longer than most of us have been alive, we’ll give you a little refresher of the amazing things she has contributed to the world:

Who knew that a group of four retirement-aged women could steal our hearts as much as they did? White played the part of Rose–the spacey friend with a trove of funny stories.

The show tackled some serious issues of the time like AIDS, gay marriage and teen pregnancy, but never lost its lighthearted atmosphere. You see, Rose had a knack for finding sticky situations to get herself into. These strange circumstances gave inspiration for many of the TV tropes still seen in shows today.

Golden Girls captured the idea of women living it up regardless of their age, which couldn’t have been more refreshing.

Between her roles in the Proposal, Lake Placid and Hot in Cleveland (along with a GREAT many cameos), Betty White established her personal character–an old woman so incredibly witty and fun you’d wonder if she was actually senile.

She crushed her appearances on late night talk shows:

And cracked us up on her own Betty White’s Off Their Rockers.

She gave us perfect excuses for our favorite activities:

And helped us understand that, even at our worst times, we’re not alone. 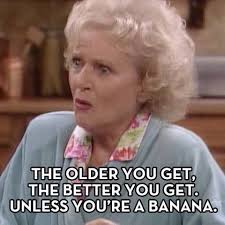 (Last Updated On: September 14, 2015)Fall is quickly approaching, bring in the new season with these badges. Animal Farm: Old McSporcle had a farm, but we produce quizzes instead of crops. Get 50% or more on […]

(Last Updated On: April 17, 2015)You might have noticed we’ve been giving the Sporcle homepage a few nips and tucks throughout the month of December. We’ve moved the activity window further down the page, added […]

(Last Updated On: December 10, 2018)While Coachella, Sasquatch and Bonnaroo music festivals might have already come and gone this year, the summer music festival season (the greatest of seasons IMHO) is just beginning. It’s okay […]