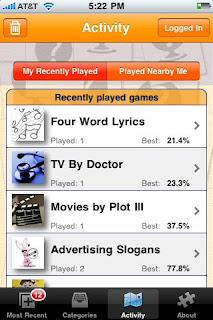 SEATTLE – May 25, 2010 – Sporcle today released a new version of its addictive trivia app for the iPhone and iPod touch, with a decidedly non-trivial feature: the app automatically delivers Sporcle’s latest brain-teasing quizzes to the iPhone every time the app launches.

With this new feature –a first for an iPhone game– Sporcle gets better every day.

Sporcle is already the #1 iPhone trivia app, ahead of apps from such trivia giants as Jeopardy!, Trivial Pursuit, Who Wants to Be a Millionaire?, and Are You Smarter than a 5th Grader?, and is one of the App Store’s top 100 paid apps overall.

Sporcle’s app for iPhone and iPod touch gives people access to hundreds of challenging trivia games they can play anytime and anywhere. No matter what they’re interested in –be it sports, movies, television, music, or geography– Sporcle’s entertaining quizzes will make three minutes (or three hours) fly by.

Sporcle’s app is an extension of Sporcle.com, a social gaming web site that offers over 90,000 short trivia and educational games. To date, these games have been played over 260 million times. Over 95% of the games on Sporcle are user-generated, created by people who use the site’s tools to generate quizzes that show off their knowledge and expertise.

Sporcle’s new app is available now through the Apple App Store for the price of $1.99.

Sporcle is a social gaming company that offers short trivia and educational games through the Sporcle.com web site and a mobile app for the iPhone and iPod touch. Sporcle was founded in 2007, has been profitable since its inception, and has never raised venture funding. Sporcle is based in Seattle and San Francisco.

(Last Updated On: May 22, 2019)Do you like winning things? Do feel good when your hard work is rewarded? If so, then we have an exciting new surprise for you! We are happy to introduce […]

(Last Updated On: July 19, 2015)We’ve been hard at work getting our daily dose quizzes out in a mobile format, and now they’re finally available to purchase in the iTunes store. The three brand new […]

(Last Updated On: April 17, 2015)Hey all Active Sporclers will notice more games popping up that have been created by some of the users in the Sporcle community. Right now, we have a very small […]